After spending ten billion dollars, country B has developed a new weapon - the Zenith Protected Linked Hybrid Zone (ZPLHZ). According to legend, the ZPLHZ is a type of spontaneously acting, intelligent weapon that is running nonstop. However, a spy from country A has discovered that the ZPLHZ actually consists of M independent weapons labeled from 1 to M. Each weapon has two types of statuses: invincible defense mode and attack mode. Initially, weapon number 1 is used for attack, and all other weapons are set to invincible defense mode. Afterwards, if at any time the i-th (1 ≤ i < M) independent weapon is destroyed, then 1 second after, the (i+1)-th weapon will automatically change from invincible defense mode to attack mode. When the M-th weapon is destroyed, this incredibly expensive ZPLHZ weapon will be entirely destroyed.

To defeat country B, the commander of country A's military decides to use one of the cheapest weapons - bombs, to destroy the ZPLHZ. After a long period of sophisticated research and top-secret spying, country A's military strategists managed to acquire 2D coordinates of the M weapons that make up the ZPLHZ. Based on these, they have selected n points on which to plant special time bombs. These n points are labeled from 1 to n. Each bomb has a radius of k, and will continuously detonate for 5 minutes. Within these 5 minutes, each bomb can instantly destroy all the attack mode weapons from country B that is within a straight-line distance of no larger than k from the bomb. Similar to the ZPLHZ, bomb a1 will detonate for 5 minutes, then bomb a2 will detonate for 5 minutes, followed by bomb a3, and so forth until the ZPLHZ is destroyed. At the time of each detonation, the undetonated bombs at that time are buried underground, and thus will not be destroyed.

Clearly, it is vital to select the right values for a1, a2, a3, … A good program can use the minimal number of bombs while also fully destroying the ZPLHZ. A bad program may use up all the bombs and still not destroy the ZPLHZ. Now, you must determine a sequence a1, a2, a3, … so that during the detonation period of bomb ax, the ZPLHZ will be destroyed. Here, the value of x must be as small as possible.

The first line of input will contain one integer T, the number of test cases to follow. For each test case:

For each test case, there should be two lines:

For each test case, if your output is valid, then you will be scored as follows. 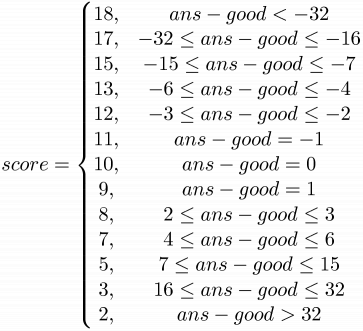 where good is our official solution for x, and ans is your solution. If your output is illegal, then your score for the test case will be 0.

Each test case is scored out of 10, and your total score will be the sum of your scores on each test case. However, a submission cannot score more than 100% of the points.