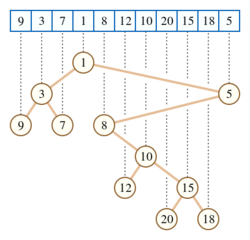 A sequence and its corresponding Cartesian tree

Given a sequence of numbers (or any totally ordered objects), there exists a binary min-heap whose inorder traversal is that sequence. This is known as the Cartesian tree for that sequence.

To see what such a tree would look like, imagine starting with the example sequence shown on the right. Because 1 is the smallest element in the sequence, it must occur at the root of the Cartesian tree (which is min-heap-ordered). Now, in an inorder traversal of the Cartesian tree, all the elements in the root's left subtree will be visited before the root, and all the elements in the right subtree after; so we can readily conclude that the elements 9, 3, and 7 occur in the left subtree, whereas 8, 12, 10, 20, 15, 18, and 5 occur in the right subtree.

It is clear from this discussion that there always exists at least one valid Cartesian tree for any given sequence.

We can guarantee uniqueness even with duplicates by insisting that if an element appears multiple times in a sequence then the occurrence furthest to the left is always considered to be the smallest, or by finding any other way to break ties.

The naive method described above may take up to

The Cartesian tree may be constructed on one pass over the sequence. We proceed from left to right and add each value we encounter as a new node to the tree; after having processed the first

elements of the sequence, we will have a valid Cartesian tree for these initial elements. After we have processed the entire sequence (

), the Cartesian tree will be complete.

Thus, we begin by constructing a singleton tree containing only the first element

in the sequence; this is a valid Cartesian tree for the segment of the sequence containing only the first element. Then, we repeatedly examine the next element

. At each step, we keep track of

, that is, the node that has label

We define our invariant is as follows: After the loop in the above algorithm has run

times, we will have a valid Cartesian tree for the first

), because we will have a singleton tree that contains just the first element of

, and clearly this is a valid Cartesian tree for just that first element.

Now assume the loop has completed

iterations, but has not yet begun iteration

. Then, we have a valid Cartesian tree of the first

, and we wish to insert

. We first observe the following:

Then consider the three cases covered in the code:

times, once for each iteration of the loop. This means that it cannot decrease more than

times in total, either, because it starts at 0 and must finish as a non-negative integer. Hence the total number of times we ascend the tree is

across all iterations of the loop, and all the other loop operations take

time total, so the construction is completed in

time. (This analysis also shows that each of the iterations of the loop uses amortized constant time.)

Another construction method relies on finding all nearest smaller values of the sequence, which can be done in linear time. That is, for each element

in the sequence, we find the maximum

; this is the nearest smaller value on the left (LNSV) . We also find the minimum

, and call this the nearest smaller value on the right (RNSV).

obtained by considering the first of equal elements to be the smallest. (In such a tree, if node with label

has a left child with label

, and if it has a right child with label

.) Then, given an element

of the sequence, excepting that it is the root of the tree, it will be either the LNSV's right child or the RNSV's left child, as determined by the following rules:

is the right child of its parent. Then its parent must be labelled

in the inorder traversal. Also,

is not the LNSV to

in the inorder traversal, but before

. This is only possible if

occurs in the left subtree of the node labelled

. However, this implies that

, a contradiction. A similar analysis shows that if

, it must be the RNSV of

. Now, pursuant to the three cases in the statement of the Theorem:

Using the preceding Theorem, after computing all nearest smaller values on both sides of each element (which requires linear time), we can determine each node's parent in constant time, so we obtain overall linear time construction.