The following sixteen delegations were invited to participate in the 2007 contest:

The contest is a one-day Internet contest, with teams competiting from within their home countries. The contest will run for five hours, and will be held on one of the first two Saturdays of May each year.

Although the contest is online, there will be a host delegation each year driving the contest to ensure it is both logistically and scientifically successful. The host will rotate from year to year. The responsibilities of the host include: 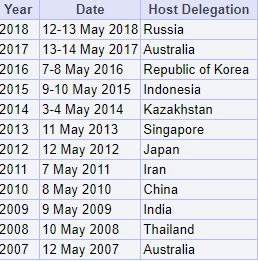 The task setting and selection is done in such a way that everybody has input.

Tasks that were submitted but never used will kept secret, and will be returned to their submitters for use elsewhere. Tasks are approximately of IOI difficulty, but with more forgiving test data.

After judging is complete, the top six competitors from each delegation will form that delegation’s official team. These official teams will form the official score table, and will be used for deciding upon awards. Awards will be in the form of certificates, labelled Gold, Silver, Bronze and Participation. The guidelines for awarding Gold, Silver and Bronze will be the same as for IOI. The host will provide the certificates, and will bring them to the IOI that year for distribution to other delegate leaders.